Pipsissewa is a petite evergreen herb that grows perennially and up to a height of 3 inches to 10 inches. Plants of this species produce glossy, vividly green, jagged leaves that emerge in order of whorls the length of the stem. Pipsissewa bears tiny flowers whose color range from white to pink and they blossom during July and August. The flowers of pipsissewa are clustered at the apex of a straight stalk. When the leaves of this herb are crushed, they exude a strange flavor which is sweetish and astringent and also has a pleasingly bitter taste.
The herb derives its name from the Cree (a native tribe of Canada) term ‘pipsisikweu' which translated into English literally means ‘it breaks into small pieces'. This name of the plant is primarily owing to the belief that the rubbery leaves of pipsissewa enclose a substance that helps to dissolve kidney stones. However, there is no scientific evidence to support this claim and actually the leaves have no such property. The Native American Indians used this plant for other therapeutic purposes as well. People belonging to the Penobscot and Mohegan tribes boiled the leaves of the plant in water and applied the solution topically to cure blisters. On the other hand, the Thompson Indians inhabiting British Columbia pounded the pipsissewa plant and used it in soaked dressings to lessen swellings of the feet and legs. On the other hand, the Catawbas called the herb fire flower and extracted a solution from it and used it to ease backache. Chippewas prepared a decoction with the pipsissewa's roots and used it as eye drops to cure aching eyes.
Pipsissewa was not only popular among the Native Americans, but also the early European settlers who also learned the use of this species from them. They took the herb internally particularly as a remedy for kidney problems and rheumatism. In traditional medicine, pipsissewa served as an astringent as well as diuretic from the period ranging between the days of Daniel Boone, an American explorer, pioneer and frontiersman, throughout the Civil War and even later. It was also taken on as an official medication quite early. During the period between 1820 and 1916, pipsissewa was catalogued in the United States Pharmacopeia. And till the early part of the 20th century, pipsissewa tonic was an essential home remedy in several households in rural North America. Even to this day, pipsissewa is used in the form of a conventional ingredient in making root beer.

Pipsissewa possesses tonic, astringent and diuretic properties and is primarily used in the form of an infusion to treat problems of the urinary tract, for instance, urethritis (inflammation of the urethra) and cystitis (inflammation of the urinary bladder), because this plant encloses a chemical compound called hydroquinones, which is known to have a remarkable disinfecting effect inside the urinary tract. In addition, earlier herbalists also used to prescribe pipsissewa to treat more grave conditions, for instance kidney stones and gonorrhea (a contagious inflammation of the vagina and urethra). Pipsissewa helps to enhance the flow of urine and, thereby, encourages the elimination of waste products from the body. In this way, the herb is also useful for treating conditions like gout and rheumatism. You may also apply the fresh pipsissewa leaves topically to treat rheumatic joints, muscles, in addition to sores, blisters and swellings.
Several tribes belonging to the Native American Indians used pipsissewa extensively with a view to promote perspiration and also to cure fevers, counting typhus. It may be noted here that a decoction is extremely effective in treating skin complaints. When used topically, the fresh leaves of pipsissewa are rubefacient (turn the skin complexion red) and when they are used internally, the leaves are very helpful in treating different medical condition, including chronic rheumatism, cardiac problems, kidney ailments and scrofula. While only the leaves of pipsissewa are recognized by the pharmacopeia, the entire plant is used for therapeutic purposes. It has been found that the plants of this species are overloaded with biologically active compounds like ursolic acids, sitosterol and arbutin. Arbutin is subject to hydrolysis to the toxic urinary antiseptic hydroquinone. Pipsissewa encloses glycosides as well as an essential oil which are used in the form of an astringent plus a tonic. Pipsissewa is harvested when the herb is in bloom and the leaves can be harvested separately during the growing season. Following harvesting, the leaves are dried and store for use when necessary. The leaves of pipsissewa are also used to prepare a homeopathic remedy, which is used to treat inflammations of the urinary tract.
Pipsissewa is known to have diuretic action with no irritating side effects. It is believed that using an herbal tea prepared with the leaves of pipsissewa for a prolonged period helps to dissolves kidney stones as well as to treat dropsy (edema). This herb may be used to treat conditions like hematuria (presence of blood in urine), albuminuria (presence of albumin in urine) and chronic kidney problems. However, while treating these conditions, you should ensure that it is being done under the supervision of a qualified medical practitioner. The tea prepared with pipsissewa leaves may also be applied topically to treat sores, ulcers, tumours, swellings, blisters as well as muscle cramps.
Several tribes belonging to the Native Americans employed the tea prepared with pipsissewa leaves to treat stomach pains, coughs and backaches. It was also used internally in the form of a diuretic and a blood purifier. Drops of this herbal tea were also used to heal eye sores. In addition, some people also smoked the dried pipsissewa leaves as an alternative to tobacco.

Pipsissewa is indigenous to North America, Asia and Europe and generally grows in the wild in woodlands and shady locales. The leaves of this plant are collected in summer.
Pipsissewa plants need slight damp, but properly drained and lime-free soil. The plants also need shade from the rays of the sun. It is quite difficult to propagate as well as cultivate the plants of this species, primarily owing to the fact that it has a specific relation with a fungi in the wild and these are essential if the plant has to succeed. Therefore, the best way to propagate this plant is to collect some soil from the region of an established pipsissewa plant while sowing the seeds or planting the seedlings outdoors in their permanent position. Plants of this species possess widely spreading fibrous roots that feed the plant and the plants generally die or are unsuccessful in increasing in size if these fibrous roots are bothered. The flowers of pipsissewa possess a sweet and invigorating aroma.
Although it is extremely difficult to propagate this plant for cultivation, pipsissewa may be grown by its seeds and, very rarely, by root division. Very seldom, pipsissewa is also propagated by softwood cutting.
Although pipsissewa is propagated by the plant's seeds, it is extremely problematic to germinate the seeds for cultivation. It is ideal that you sow the seeds in a shaded area of the greenhouse on a damp sphagnum peat immediately when they mature. When the seedlings have grown sufficiently large to deal with, they should be pricked individually and planted in separate pots and let them grow for a minimum of their first winter in any shady spot in the greenhouse. The young plants may be re-planted in their permanent positions outdoors during the late spring or the early part of summer after the last anticipate frost has passed.
It is somewhat difficult to propagate pipsissewa by means of root division because the plants are extremely susceptible to any kind of botheration to their long fibrous roots. However, it is best to attempt propagation of pipsissewa by root division during spring, since the plant is in full growth during this part of the year. Cutting of softwood of the herb for propagation may be done in June and the cuttings should be sowed in a frame. It is advisable that you use some soil from the region of an established plant while propagating this herb.

Chemical analysis of the pipsissewa herb has revealed that it encloses flavonoids, hydroquinones (counting arbutin), tannins and methyl salicylate. The hydroquinones enclosed by the herb have a marked disinfecting action inside the urinary system.

Pipsissewa is used in different forms for therapeutic purposes - tincture, syrup and tea.

Syrup
To prepare syrup with pipsissewa, marinate about four ounces of finely crushed pipsissewa leaves in 8 fluid ounces of water and allow it to stay for 36 hours and filter the mixture till one pint of fluid is obtained. Next, evaporate half pint of the fluid and add 3/4 pound of sugar to the remaining fluid. The normal dosage of this syrup is taking one to two tablespoonfuls daily.
Tea
To prepare an herbal tea with pipsissewa, boil one teaspoon of the plants leaves (you may also use the whole plant) in half a cup of water. Take a mouthful of the tea at a time throughout the day. Don't add any sweetener to this herbal tea.
Tincture
The standard dosage of pipsissewa tincture is taking two to 15 drops of it as required.

Side effects and cautions

While there is no record regarding any toxic action of pipsissewa, in general this herb is considered to be safe when taken in medicinal doses. However, when taken in large doses, the astringent attribute of the plant might cause irritation in the gastrointestinal tract. In some case, topical application of formulations prepared with the herb has resulted in dermatitis in susceptible individuals.


How it works in the body

Pipsissewa has several therapeutic uses. This herb may facilitate in lessening swelling, have a dehydrating (astringent) influence on the tissues and also eliminate germs that infect the urinary system.
Posted by Unknown at 10:14 AM

Email ThisBlogThis!Share to TwitterShare to FacebookShare to Pinterest
Labels: Pipsissewa

I love to hear from you!

Take me to your blog! 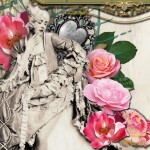 Welcome to my studio in the North Georgia mountains!

As a child I loved creating "something from nothing" with twigs, leaves and pieces from nature. My materials have been upgraded thirty years later, to antique lace, vintage fabrics and trims! I work mainly in silk, satin and linen, sometimes dying and over-dying to achieve the "vintage-found in the attic trunk" essence that I love so much.

Today I sell antiques and handmade garments and anything else that catches my fancy!

Blogs I love to read!